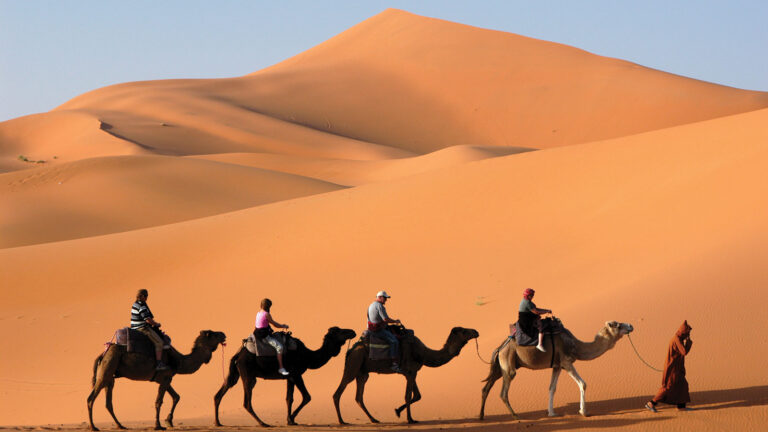 Today Sahara is large, it is even huge. Bigger than Australia! And I wonder if it’s easier to live in Sahara than in Antarctica. Nevertheless, you can find humans in Sahara, but in Antarctica not.

But many time ago Sahara was different than today, and there are some proves for that:in some caves from the Mountains Tassili-Tibesti there are incredible images, comparing with the situation from today: green planes, and domestic animals.

Today Sahara is expanding daily. The inhabitants are already very poor, and become even poorer. Politically, Sahara is divided between Egypt, Sudan, Libia, Chad, Morocco, Spanish Sahara, Mali and Mauritania. The population is very seldom; some of them are nomads, and others settled in oasis.

Very dry on the surface, full of sand, Sahara lies on a sea of drinking water. But for this water you must dig very deep, beyond 200 meters. This costs a lot, and these are poor countries, don’t forget.

The cities of the desrt have indeed some fascinating. I would not consider Cairo and Khartoum desert cities, they are some gifts of the Nile. Maybe Bamako and N’Djamena are typically desert cities. But what is then Tunis,Rabat, Casablanca,Tripoli? They are coast and harbour cities, in my opinion. Let me know if you agree my opinion, or not!